In December 2019, The Children’s Ballet presented the first rendition of Tchaikovsky’s beloved classic ever performed in Hendricks County. Our local actors, professional dancers, and more than 50 local students, brought The Nutcracker to life on stage in an event that promises to be a family favorite for years to come. 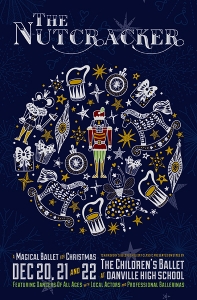 The Nutcracker is a two-act ballet with a score written by Pyotr Tchaikovksy and originally choreographed by Marius Petipa and Lev Ivanov. The original performance was on December 18, 1892, and The Nutcracker has since become one of the most well-known and beloved ballets, especially around the Christmas season.

Our production of The Nutcracker featured performances by our friends at Hendricks Civic Theatre and professional dancers from area dance companies, as well as a special guest appearance by Bill Franklin (Courthouse Grounds) as Godfather Drosselmeyer.

The Story of The Nutcracker

Our story begins on a snowy Christmas Eve in 1892 as party guests arrive at the Danville home of the Stahlbaum family. The Stahlbaum daughters, Marie and Fritzi, wait impatiently for the unveiling of the sparkling Christmas tree, while the guests celebrate with dancing and gifts.

As the grandfather clock strikes eight, a mysterious figure strides into the room. It is Herr Drosselmeyer, a talented toymaker and Marie’s godfather, who has brought with him gifts for the children. His two lifelike dolls, Harlequin and Columbine, dance to the delight of all (until their mechanisms go awry!).

Drosselmeyer has one more toy to share: a wooden Nutcracker, carved in the shape of a toy soldier. Marie falls for the
Nutcracker at once and cradles it until Fritzi breaks it in a fit of jealousy. Marie is heartbroken. However, Drosselmeyer uses his toymaking skills, and a little magic, to repair the Nutcracker. As the party comes to a close, all the guests honor the grandparents with a dance.

During the night, Marie creeps downstairs to check on her beloved Nutcracker, reaching the parlor as the clock strikes midnight. Suddenly, mice fill the room as the Christmas tree grows to dizzying heights. The Nutcracker springs to life and Marie finds herself in the middle of a battle between an army of toy soldiers and the mice. The Nutcracker is wounded in battle. When the Mouse Queen advances upon him, Marie throws her slipper at the royal rodent, distracting her long enough for the Nutcracker to finish her off.

The mice retreat and the Nutcracker leads Marie through a moonlit night to a pine forest in which snow flurries, snowflakes and the Snow Queen dance, beckoning the travelers to journey on to the Nutcracker’s kingdom. When Marie and the Nutcracker reach the enchanted Land of Sweets, he is transformed into a Prince. The Dew Drop Fairy, who had ruled the land in his absence, listens in wonder as the Prince tells how Marie saved him from the Mouse Queen.

In honor of the young heroine, a celebration of sweets from around the world is produced: chocolate from Spain, coffee from Arabia, tea from China, and candy canes from Russia. Mother Ginger and her children, the Polichinelles, greet Marie, followed by a company of marzipan flutes. A string of beautiful flowers led by the Dew Drop Fairy performs a waltz, and the Sugar Plum Fairy adds her dance to the celebration. After a final waltz is performed by all the sweets, the Dew Drop Fairy ushers Marie and the Prince to their sleigh, which takes off as they wave goodbye.

Photos from The Nutcracker

All photos of the 2019 production of The Nutcracker provided by Photography By Sarah Crail.

We welcome donations of any amount. Because we are a 501(c)3 organization, all your donations to us are tax-deductible!

We serve students of all ages from Hendricks County and surrounding areas.

We are dedicated to providing high-quality dance instruction while helping students develop self-discipline, dedication, positive self-esteem, and an appreciation for the art of dance.

We value and nurture each student’s unique gifts of talent and creativity in a safe studio environment in order to educate, enrich, and inspire.